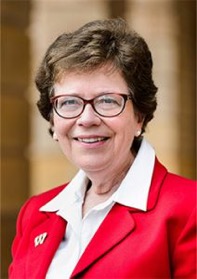 Rebecca Blank became chancellor of Wisconsin’s flagship university in July 2013, bringing with her a deep commitment to educational excellence and innovation. Blank is an internationally respected economist who also has spent time in Washington, D.C., working in three different administrations.

Blank brings strong academic credentials to her work as chancellor. From 1999 to 2008 she was dean and professor of public policy and economics in the Gerald R. Ford School of Public Policy at the University of Michigan, where she launched innovations including interdisciplinary graduate programs and an undergraduate public policy major.

Blank also has served on the faculty at Northwestern and Princeton Universities, and was a fellow at the Brookings Institution, a nonprofit public policy research think tank in Washington, D.C.

Blank’s commitment to expanding and improving educational opportunities inside and outside the classroom to better prepare students to succeed in a rapidly changing economy has been a hallmark of her tenure at UW. At the same time, she has worked to maintain the university’s position as a global leader in innovation and research, and has emphasized the role of the university in nurturing entrepreneurship and driving economic development.

Blank is a frequent speaker on the importance of public research universities. She has been part of a vital national conversation about how to keep these institutions financially stable and thriving.

Her leadership has reinforced UW-Madison’s position as one of the world’s top 25 universities – a center for education, discovery and research, committed to sharing knowledge and innovation that improves lives in Wisconsin and around the globe.

Blank’s deep contributions to academic and policy worlds have been recognized with numerous national and international awards, as well as honorary doctoral degrees. Most recently, the American Academy of Political and Social Science honored her with its Daniel Patrick Moynihan Prize.