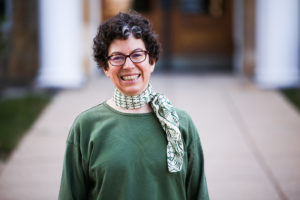 Karen Evans-Romaine is Professor of Russian in the Department of German, Nordic, & Slavic, University of Wisconsin – Madison, and director of the Russian Flagship program, a collaborative effort of Slavic and the Language Institute, together with the doctoral program in Second Language Acquisition and the Center for Russia, East Europe, and Central Asia. Before coming to UW-Madison, Evans-Romaine was Associate Professor of Russian at Ohio University and director (2003 – 2009) of the Kathryn Wasserman Davis School of Russian, Middlebury College.

Evans-Romaine’s research focuses on both Russian literature, in which she examines German-Russian literary relations and intersections between literature and music, and Russian language pedagogy. She is co-author, together with first author Richard Robin and Galina Shatalina, George Washington University, of the two-volume introductory Russian textbook Golosa (Voices), now in its fifth edition (Pearson); co-editor, together with first editor and Russian Flagship Associate Director Dianna Murphy, of The U.S. Language Flagship Program: Professional Competence in a Second Language by Graduation (Multilingual Matters, 2017); and co-editor, together with first editor Tatiana Smorodinskaya and Helena Goscilo, of the Routledge Encyclopedia of Contemporary Russian Culture (2007).